Anna Bizub was a midwife on the Eastside of Passaic, known as the Dundee Section. She assisted to those pregnant mothers and their families in a time before maternity care was what it is today. In the early 1900's being a midwife was more than delivering a baby. A midwife, cooked, cleaned and cared for the family until the mother was able to resume her household responsibilities. Anna Bizub was an adviser, a care giver and a provider of support in an emotional time in a family's life.

On September 30, 1919, she purchased ten shares of stock in the "Passaic Undertaking & Embalming Company" in the amount of $1,000. In doing so, she obliged herself to purchase ten more shares of capital stock at the same price by December 30, 1919 in order to ensure employment for her son, Joseph T. Bizub, as an "assistant undertaker and embalmer."

For the investment of $2,000, Joseph T. Bizub, assistant undertaker and embalmer, was permitted to clean the horse stalls and livery barns of the Passaic Undertaking & Embalming Company at a salary of $20.00 per week. In addition, he was to be trained as an embalmer and undertaker.

For four years Joseph worked for the company until 1923 when he opened Bizub's Funeral Home at 205 Third Street in Passaic, New Jersey. For 42 years Joseph and his wife Margaret, developed the business by treating families as they would want to be treated and making sure each family received the proper amount of compassion, dependent on their circumstances. He opened up a second location at 515 Lexington Avenue in Clifton when his son, Thomas J. Bizub, Sr., earned his funeral directors license. Joseph T. Bizub died in 1973 and the business was transferred to his son.

From there, Tom has expanded the Bizub Funeral Home into a third generation, three location, family owned and community based funeral home. 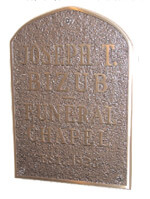 From our modest Passaic beginnings and with vision and foresight of our grand and great grandmother, Anna Bizub, the Bizub family has continued to provide support and care for families of Passaic County and neighboring communities for nearly 100 years. We sincerely hope that we can be of tremendous value to you and your family in your time of need.

Please call us for more details: